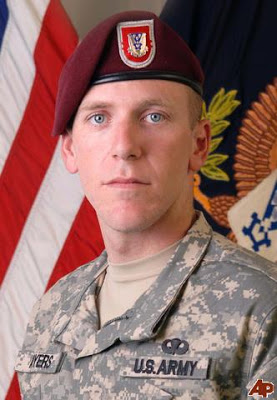 Cpl. Jonathan R. Ayers 24, of Snellville, GA was 1 of 9 heroes who fell in the heat of battle while supporting Operation Enduring Freedom. Cpl. Ayers died of wounds suffered when their outpost was attacked by small arms fire and rocket propelled grenades from enemy forces in Wanat, Afghanistan, on July 13, 2008. He was assigned to the 2nd Battalion, 503d Infantry Regiment (Airborne), 173rd Airborne Brigade Combat Team, Vicenza, Italy.

The contest will be open to any high school senior who is attending a public, private, parochial, or home school in Walton or Gwinnett counties and who is pursuing higher education in an accredited college, university, or trade school. Award will be based on an essay contest focused on applied freedoms in America.

The essay contest will open on January 1st and the award will be announced in April.

“It is not the critic who counts; not the man who points out how the strong man stumbles, or where the doer of deeds could have done them better. The credit belongs to the man who is actually in the arena, whose face is marred by dust and sweat and blood; who strives valiantly; who errs, who comes short again and again, because there is no effort without error and shortcoming; but who does actually strive to do the deeds; who knows great enthusiasms, the great devotions; who spends himself in a worthy cause; who at the best knows in the end the triumph of high achievement, and who at the worst, if he fails, at least fails while daring greatly, so that his place shall never be with those cold and timid souls who neither know victory nor defeat.” Teddy Roosevelt.

This is the most famous and most quoted passage from Teddy Roosevelt’s famous speech that is often called the “Man in the Arena” speech.  The actual speech was called “Citizenship in a Republic” and was delivered in France in April of 1910.   The speech was about just that, the roles of a citizen in a Democratic Republic. Choose a different passage from that speech and explain what it means to you, as a citizen of the United States today.

You can find the full text of the speech here: https://www.theodorerooseveltcenter.org/Learn-About-TR/TR-Encyclopedia/Culture-and-Society/Man-in-the-Arena.aspx

The contest is open to writers who are both residents of Gwinnett or Walton Counties in Georgia and are High School Seniors at some point during the contest period.

Essays should be 800-1000 words in length. Submissions that do not meet this requirement, or that exceed it, will be disqualified.

All essays must be the original work of the student whose name is listed on the submission. Plagiarism will result in immediate disqualification.

Our Judges will evaluate essay submissions in a fair and unbiased judging system, where judges will all use the same criteria. Judges will be selected by the Legion Riders based on their backgrounds, education, writing, and the subject matter. Decisions of the judges are final.

The ownership of any submission remains the property of the writer, but entry into the competition constitutes the entrant’s permission and consent, without compensation, with or without attribution, for The American Legion Post 233 and the American Legion Riders of Post 233 to use, reproduce, transmit, post, distribute, adapt, edit, and/or display the submission.

Essays must be submitted via email to scholarships@gapost233.com and must include the Subject Line of Jonathan Ayers Memorial Scholarship Entry. Students should include their Full Name, Email Address, Mailing Address, and a contact Phone Number in the body of the email above the essay.